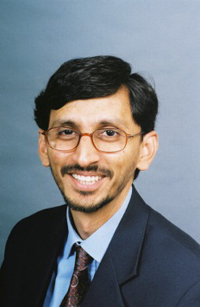 As an instructor, Abbas Zaidi’s pedagogical approach has been to challenge his students to solve real world problems as independent thinkers, utilizing their learned techniques and not relying solely on solution recipes provided in textbooks or lectures. He thinks his job as a teacher ends the moment a student becomes an independent learner. As a teacher, he finds this journey rewarding in many ways for both himself and for his students: he thinks the students have taught him more in this process. He firmly believes that learning should be a fulfilling and, therefore, a joyful experience. He has been enjoying teaching for the last 25 years in different capacities at many universities all over the world. He also had an academic administrative experience, working as the Dean of Faculty, in a private university in 2000-2003. He left the job as quickly as he could!

Abbas Zaidi also contributes to research excellence at the Volgenau School of Engineering through the Department of Systems Engineering and Operations Research. He remained associated with the System Architectures Laboratory of the Department of Electrical and Computer Engineering for two decades. During his tenure at the lab as the Director of Research, he was instrumental in attracting several research projects and funding grants from renowned research organizations. His primary research areas include multi and metal-modeling, discrete event systems, semiconductor manufacturing, formal methods for validation and verification, and application of systems methodologies in solving societal problems for disadvantaged and developing communities.

Abbas Zaidi is vocal advocate of the use of new instructional technologies, e.g., online/distance learning tools, instructional videos, virtual labs, recorded lectures, etc. He has been teaching distance learning (DL) courses for more than a decade. He also manages a YouTube channel (https://www.youtube.com/user/szaidigmail) to prepare post and link videos on topics in science, technology, engineering, and mathematics. As of September 2016, the channel has around 850 subscribers from all over the World with more than 260,000 views since its inception in 2011.

2010 - 2011 : Multi-Modeling and Meta-Modeling in the Human Terrain. Funded by Lockheed Martin.