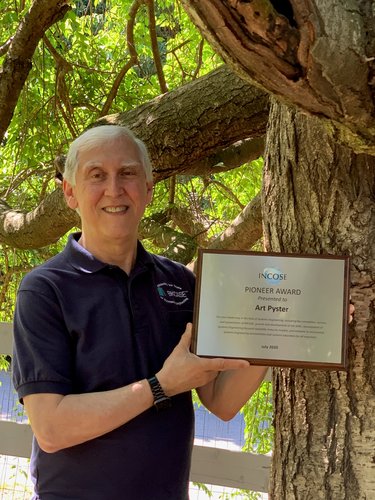 Mason Engineering's Art Pyster received the prestigious Pioneer Award from INCOSE-International Council on Systems Engineering for his work in the systems engineering field.

Every year, the award is given to one distinguished individual or team, who by their achievements in the engineering of systems, has contributed uniquely to major products or outcomes enhancing society or meeting its needs.

“It’s a great honor,” says Pyster, associate dean for research for the Volgenau School of Engineering (VSE) and a professor in the Department of Systems Engineering and Operations Research (SEOR). “I love systems engineering. “Almost every major 21st-century challenge is a systems problem, such as clean water, climate change, resilient cities, and cybersecurity,” he says.

During his career, Pyster has played a leading role with systems and technologies in telecommunications, aerospace, defense, air traffic control, and computing, as well as paving the way for better systems engineering education.

The award recognized several of his key career accomplishments, including leadership creating the Systems Engineering Body of Knowledge (SEBoK). This regularly updated free wiki is considered the world’s most widely read source on systems engineering. Its articles have been accessed more than four million times, he says.

He was also recognized for being instrumental in adding systems engineering concepts to other engineering programs through ABET, which accredits college and university programs in over 30 countries, including the United States. “All engineers need to know something about systems engineering, not just their own discipline,” he says.

Pyster spent most of his career in industry and government. Early on, he helped create one of the original commercial voicemail systems. While serving as deputy chief information officer for the Federal Aviation Administration, he oversaw the information security accreditation of the air traffic control system.

Since he came to Mason Engineering four years ago, the size and impact of the Volgenau School’s diverse research portfolio have steadily grown. Over that period, research expenditures have increased from around $16 million to more than $60 million today. Total anticipated awards from engineering’s whole research portfolio are over $400 million.

“Given our location in Northern Virginia, we have an amazing opportunity to do so much impactful research," Pyster says. "Surrounded by industry and the government, our size, vitality, and innovation let us take on problems that would not be possible at many universities.”

Pyster is the third member of Mason Engineering’s faculty to receive the award in its 24-year history. In 2002, Mason’s Andrew P. Sage, founding dean of the VSE and among the founders of the systems engineering, received the award. In 2007, John N. Warfield, a professor at Mason and one of the fathers of systems science, received the award.