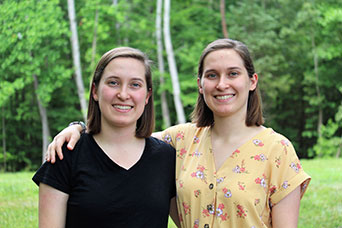 Megan and Mary Taylor graduated with their bachelor's degree in systems engineering and are currently taking a summer course towards their master's. Photo provided.

Graduates from the Department of Systems Engineering and Operations Research (SEOR) know how to look at the big picture, and twins Megan and Mary Taylor apply this method of finding solutions to all of the obstacles they face.

In May of 2020, Megan and Mary officially finished out the undergraduate portion of their accelerated bachelor’s/master’s program, but that was just the beginning of their journey.

While Mary and Megan both got their bachelor’s of science degrees in systems engineering, they selected different foci in their programs.

They both say that because systems engineering is so multi-faceted, it has helped prepare them for their respective fields. “Systems engineering helps you see the big picture for every project and how different areas connect, we have even learned about the business side in senior design, and we use that type of view and analysis in our fields,” says Mary.

Along with their studies, the Taylor twins have always looked for ways to get involved since they stepped onto the Fairfax campus.

During their freshman year, as members of the Honors College, they got involved with the Honors College Connects program where they worked on various team projects for businesses and non-profits. “This was a great opportunity to see how other people work. We were in teams of four or five with people from different majors and they all tackled the same problems different ways,” says Megan.

At the beginning of their sophomore year, they took on more challenges by becoming undergraduate teaching assistants for the Department of Computer Science after they both excelled in their introductory course, CS 112 – Introduction to Computer Programming.

Like Megan, Mary was wary about taking a computer programming course but ultimately found it exciting, “Megan is my tech support, so I had no idea what to expect at first, but I’m glad I did it,” says Mary.

They also started as peer mentors for Mason Engineering’s peer mentor center, which they continued working at until graduation, where they both tutored fellow engineering undergraduate students in physics and calculus.

“Tutoring gave me a perspective on what other majors and concentrations do with the same courses. Like cybersecurity majors, they take some systems classes and it was interesting to see how they applied the same class to their own specialty,” says Megan.

In addition to their on-campus work, the summer after their junior year they both completed internships in the Department of Defense’s Science, Mathematics, and Research for Transformation (SMART) scholars’ program where they worked to find different engineering solutions. Unfortunately, their program for summer 2020 was canceled, but they will start full-time positions through the SMART program after earning their master’s degrees.

“Their extracurricular activities and summer jobs demonstrate their commitment to helping others,” says Megan and Mary’s advisor and instructor Kathryn Laskey, a SEOR professor. “They are the kinds of students we want to attract to the engineering profession.”

Plans for the future

Mary and Megan are finishing up their master’s program hope to graduate by May 2021.

Afterward, they are going into careers through the SMART scholars’ program with the Department of Defense in different research areas.

Megan will be working at Marine Corps Systems Command in a systems engineering role, and Mary was placed with the National Geospatial-Intelligence Agency and is waiting on her assignment.

In the meantime, even though their internship was canceled, Mary and Megan are still creating and reaching personal goals. “We love to hike and bike and stay active, so we are training for a week-long hike this summer, which we’ve never done. We always tried to get out and bike when we were on campus too,” says Mary. They are also helping their dad start his own company.

But whatever bumps in the road or changes come their way, Mary and Megan will take a look at the big picture and find an engineer’s solution on how to make the most of what they’re given.